Luanda is the most expensive city in the world for an expatriate professional migrant to live in as at January 2018, followed by Hong Kong and Singapore. The top ten most expensive cities in the world comprise one from Africa, Luanda (1), three from Asia-Pacific, Hong Kong (2); Singapore (3); Tokyo (8), four from Europe, Oslo (4); Zurich (5); Geneva (6); Monaco (10), and two from America, Hamilton (7); Manhattan NY (9).

As opposed to Hong Kong, everything in Luanda is expensive as almost all international standard goods and services are imported. Despite the lower oil price, the slow-down in oil related projects, and dramatic reduction in revenue to Angola in 2016, prices in Luanda remain extremely high.

Hong Kong is the second most expensive city due to the very high cost of housing and healthcare, as well as the strong Hong Kong dollar which is fixed against the US Dollar.

Singapore is the third most expensive city in the world for Expatriate’s to live. Singapore's education system, which is widely regarded as the best in the world, is also the most expensive for expatriates when priced in US Dollars, the cost of housing is also extremely high due to the limited space and premium on high quality expatriate accommodation, while the complex Certificate of Entitlement system makes car prices excessive, resulting in Singapore’s transport costs being amongst the highest in the world. 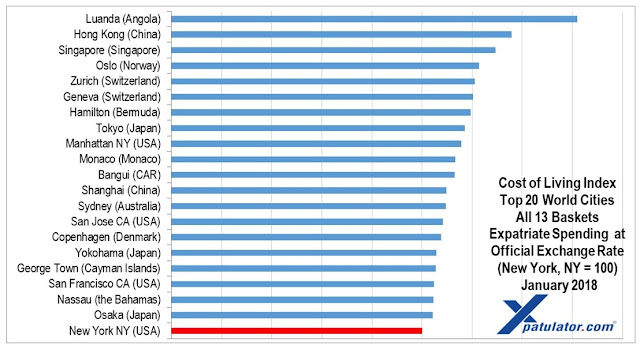 Full Ranking
https://www.xpatulator.com/cost-of-living-article/International-City-Cost-of-Living-for-Expatriate-Professional-Migrants_716.cfm
Posted by Internal Cost of Living at 9:50 AM