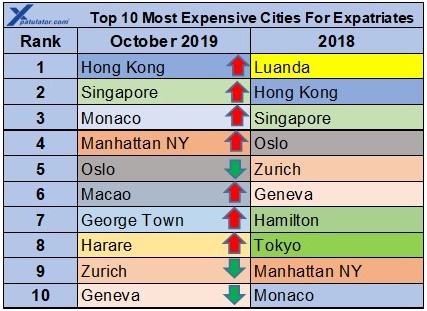 #HongKong is the most expensive city in the world in 2019, followed by #Singapore and #Monaco. The biggest change this year was #Harare in #Zimbabwe moving into the top 10 and #Luanda in #Angola moving out.

Hong Kong is the most expensive city due to the very high cost of housing and healthcare, as well as the strong Hong Kong dollar which is fixed against the US Dollar. An interesting observation is the fact that if 4 of the 13 baskets are excluded from the cost of living index calculation (namely Housing, Education, Medical and Transport) then Hong Kong drops out of the top 10 most expensive cities in the world. This illustrates that not everything in Hong Kong is expensive. It is therefore very important it is to ensure that the correct baskets are included in a cost of living index calculation. In running Xpatulator.com reports users will see that any of the 13 baskets can be included or excluded as needed. If for example an expatriate professional migrant is provided with housing, education (schooling for children) and medical insurance by their employer, then these baskets should be excluded from the cost of living calculation. Only those baskets that the employee will spend their salary on should be included in a cost of living index for an international assignment.


Singapore is the second most expensive city in the world for Expatriate’s to live. Singapore's education system, which is widely regarded as the best in the world, is also the most expensive for expatriates when priced in US Dollars, the cost of housing is also extremely high due to the limited space and premium on high quality expatriate accommodation, while the complex Certificate of Entitlement system makes car prices excessive, resulting in Singapore’s transport costs being amongst the highest in the world.

Posted by Internal Cost of Living at 5:28 AM